In his Sunday sermon on April 12, “Pope Francis referred to the 1915 Turkish mass killings of Armenians as the ‘first genocide of the 20th century.’”

This papal declaration instantly flared into a diplomatic uproar. It absolutely infuriated Turkey’s Islamist President Tayyip Erdogan, who “warned” the Pope against repeating his “mistaken” statement.

There was actually no mistake about it: The fact is, the Armenian Genocide cost 1.5 million Armenian Christians their lives, along with another million Assyrian and Greek believers.

And, thanks to the Pope’s pronouncement and Erdogan’s outrage, the rest of the world was effectively reminded of the approaching centennial of that genocide, which will take place on April 24.

A death march to nowhere.

The horror story began on April 24, 1915, when Turkish authorities arrested hundreds of Armenian professors, lawyers, doctors, clergymen and other elites in Constantinople (now Istanbul). These revered members of the community were jailed, tortured and hastily massacred.

That mass murder marked the initiation of a death sentence on an entire religious population.

As reports of the leaderships’ slaughter spread across Turkey, terror gripped Armenian cities, towns and villages, which in 1915 were home to approximately 2,100,000 souls. According to the University of Minnesota’s Center for Holocaust and Genocide Studies, by 1922, only 387,800 Armenians remained alive.

After killing the most highly educated and influential men in the community, the Turks began house-to-house searches. Ostensibly they were looking for weapons, claiming that the Christians had armed themselves for a revolution.

Since most Turkish citizens owned rifles or handguns for self-defense in those days, it wasn’t difficult for the Turks to find arms in Armenian homes. And this served as sufficient pretext for the government to arrest enormous numbers of Armenian men who were subsequently beaten, tortured and, like the others, mass murdered.

The family members who survived – mostly women, children, the ill and the elderly – were forced to embark upon what has been described as a “concentration camp on foot.” They were told they would be relocated; in reality, they were sent on a death march to nowhere. They were herded like animals, – with whips and cudgels and at gunpoint. 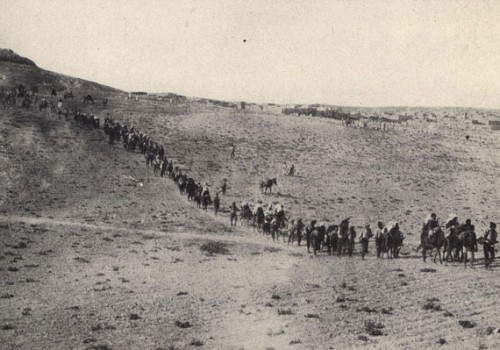 These captives were provided with little or no food or water. Old people and babies were the first to die. Mothers were gripped with insanity, helplessly watching their little ones suffer and succumb; more than a few took their own lives. Eyewitness accounts and photographs remain today, and they are heart wrenching. Corpses littered the roads; nude women were crucified; dozens of bodies floated in rivers.

On Jan. 5, 2015, Raffi Khatchadourian published a personal essay in The New Yorker about his Armenian grandfather, who somehow survived the Armenian Genocide. He described the brutality:

Whenever one of them lagged behind, a gendarme would beat her with the butt of his rifle, throwing her on her face till she rose terrified and rejoined her companions. If one lagged from sickness, she was either abandoned, alone in the wilderness, without help or comfort, to be a prey to wild beasts, or a gendarme ended her life by a bullet.

Another portrait of those terrible times, The Forty Days of Musa Dagh, is a work of historical fiction written in the 1930s by Franz Werfel, an Austrian Jew. A meticulously researched account based on a true story, the novel relates the insubordination of a group of some 5,000 Armenian villagers who lived at the foot of a seaside mountain called Musa Dagh. Led by a courageous Armenian veteran of the Turkish army, the townsmen defied Turkish relocation orders. Instead, they fought for their lives and many of them survived; French ships eventually rescued them.

A portrait of defiance and courage, Forty Days of Musa Dagh inspired Jews in Polish ghettoes to fight to the death against their Nazi overlords. Unsurprisingly, Werfel’s book fed the flames of many a Third Reich book-burning.

Some Turks claim that World War II-era Armenian Christians had aligned themselves with Russia and were therefore a threat to Turkish security. But although the excuse that Armenian Christians were “enemies of the Turkish State” is still bandied about, German historian Michael Hesemann documented that they were killed for explicitly religious reasons:

Indeed, the Armenian Genocide is described as a jihad in numerous accounts. Needless to say, that scenario is far from over. In fact the story of Christians being massacred by Islamist forces continues apace in the Middle East.

Not so long ago…

A little more than year ago, a nightmare scenario materialized in the Armenian town of Kessab, Syria. On March 21, Al-Qaeda affiliated terrorists attacked Kessab, driving the Christian residents out of their ancestral homes in an assault eerily reminiscent of the 1915 attacks.

In one article, which appeared on April 8, I quoted first-person statements from a few of Kessab’s residents:

“Before sunrise, we woke up to the horror of a shower of missiles and rockets falling on our town. Thousands of extremists crossed the borders towards our town. Missiles were fired from Turkey to destroy beautiful Kessab and to celebrate the approach of the 100th anniversary of the Armenian Genocide. Kassabtsi heroes defended the town with their simple hunting weapons…

It was widely reported that the Turkish army assisted in this incursion or, at the very least, turned a blind eye to it. And certainly, as noted above, the residents of Kessab had not forgotten the genocide. In fact, they viscerally felt that their sudden expulsion and the ravaging of their homes and churches was a replay of the 1915 horrors, 99 years after the fact.

In Jerusalem’s Armenian Quarter, I attended the April 2014 remembrance of the genocide, which was followed by an impassioned demonstration in front of Jerusalem’s Turkish Consulate on behalf of Kessab. Dozens of protesters wearing “Save Kessab” T-shirts sang, chanted and demanded the rescue and repatriation of the town’s expelled population. 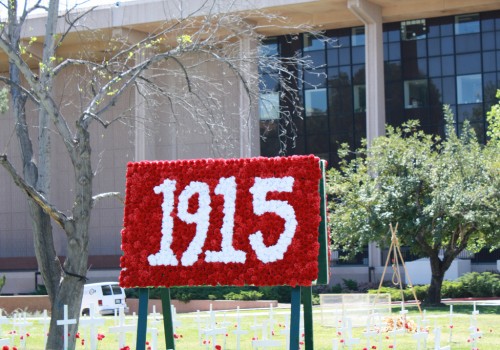 Armenian Genocide Remembrance Day is observed around the world on April 24.

Of course the Middle East’s Christian persecution story didn’t end with Armenian Christians alone. And it continues with ISIS and other radical Muslim militias even now, as gruesome videos of beheadings and mass shootings continue to remind us.

I visited the Christian refugees in Erbil’s Christian enclave, Ankawa in November 2014. These mostly Assyrian Christians already knew about the Islamic State’s killing of Christians in Syria and Iraq. Then, suddenly, their own cities, towns and villages were given short notice – less than 24 hours, and sometimes just minutes – to get out or face death.

As I have written elsewhere,

The refugees lost their personal history, their identity. They were stripped of passports, birth and baptismal certificates, diplomas, national identification papers, commercial licenses and deeds of property. They handed over or left behind personal treasures like inherited jewelry, trophies, photographs and family memorabilia. The terrorists took their automobiles, cash, cellphones, computers, and business and personal files.

By the time they arrived in Erbil, collapsing in exhaustion in churchyards and on sidewalks, they had lost everything. They left their family homes with, as the saying goes, nothing but the shirts on their backs.

Their Christian faith was bruised and battered. In some cases, all hope was lost.

“Who speaks today of the annihilation…?”

It’s no wonder that Israelis ask me – some of them the offspring of Holocaust survivors – “Why aren’t you Christians doing anything about the persecuted Christians in the Middle East?”

They certainly have a point. Today’s fragmented global Christian community could learn valuable lessons from successful Jewish advocacy and activism. But the Jews’ insistence on paying attention to persecution – both their own and that of others – springs from a dark and haunted past.

In 1939, as he planned his “Final Solution” to rid the world of Jewry, Adolf Hitler notoriously said, “Who, after all, speaks today of the annihilation of the Armenians?”

Of course he was very wrong. Today, during the centennial of the Armenian Genocide, countless voices will speak out in remembrance of Turkey’s murdered Christian population. As Hitler implied, and as Pope Francis indicated with the words “first genocide of the 20th Century,” the Armenian Genocide became a prototype for the Third Reich’s Holocaust.

Yet despite the Genocide and the Holocaust – and despite a sorry world’s declarations of “Never Again” – Jews and Christians continue to pay with their lives for anti-Semitism, anti-Christianity and Islamist fanaticism.

While such diabolical ideologies persist in driving the world mad, what can we do but stand together in defiant resistance?

And let us take the time to recall, with reverence and resolve, 100 years of unspeakable losses.