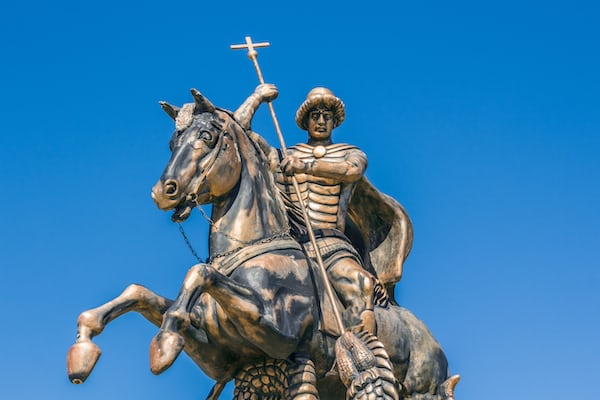 In 451 CE under the command of Vartan Mamikonian, Armenians fought the Sasanian Persians in one of the first battles to defend Christianity: the Battle of Avarayr. It came as a result of the Armenian people’s steadfast commitment to their religious beliefs amidst increasing intolerance and oppression. While a minor event in the annals of Iran, the battle continues to be one of the most defining episodes in Armenian history.

In 301, Armenia became the first nation to adopt Christianity as a state religion. Despite Christianity playing a pivotal role in the emergence and maintenance of the Armenian people’s national identity going forward, it created many challenges for the fledgling nation. In 387, Byzantium and Persia partitioned Armenia, which historically found itself caught between conflicting interests of both the East and West, and most of Armenia proper fell under Sasanian dominion. At the time, political loyalty was inseparable from religious conformity, so the Christians in Iran were perceived as a subversive element threatening the safety of the Sasanian state. Since Armenians’ religious traditions were similar to Christian Rome, Persian authorities attempted to disrupt the close relationship between the Armenian and Greek churches. The situation intensified following the collapse of the Armenian Arsacid dynasty in 428 and the rise of the Sasanian monarch Yazdegerd II. A fervent Zoroastrian, he ordered his subjects to abandon their Christian confession and convert to Zoroastrianism. The Armenians bravely refused, and for the next half-century they mobilized in self-defense to restore their right to practice Christianity.