The Breath of God: A Short History of the Armenian Alphabet - Philos Project

The Breath of God: A Short History of the Armenian Alphabet 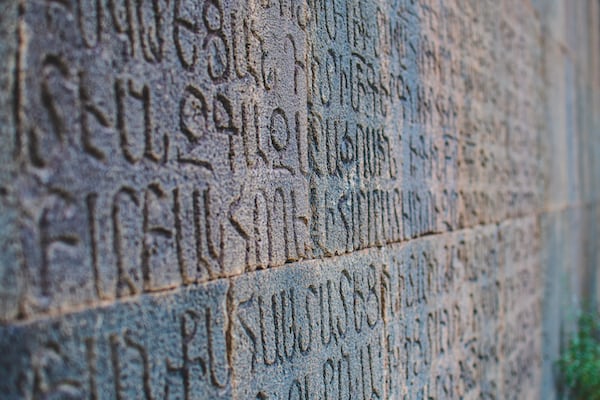 Armenia was the first nation to adopt Christianity as the state religion in 301 CE. This act was the precursor to the development of a distinct Armenian ethos separate from its neighbors, primarily Iran. It ultimately led to the invention of the Armenian alphabet in 405 CE, which was integral to the emergence and cultivation of the Armenian ethno-religious identity.

Following the partition of Armenia in 387 CE, the Armenian realm was rent in twain. A political interregnum followed and subsequently acted as the impetus toward pioneering the notion for a need of an Armenian alphabet. A nationalized religion and a distinct alphabet would effectively act as a tool to unify the Armenians living in the Byzantine Empire and Sassanid Iran, in addition to upholding the essence of what it meant to be Armenian.

Prior to the fifth century, Armenians used Greek for artistic and cultural expressions, Latin and Middle Persian for official communication and inscription, and Syriac for liturgical purposes. During the interregnum, when national unity was compromised, St. Sahak Partev Catholicos realized that in order to retain any ecclesiastical and political control over a partitioned nation, the unifying nature of the Armenian language would be crucial. Under the patronage of the Catholicos, St. Mesrop Mashtots was tasked with inventing the Armenian alphabet.